What is NAS (network-attached storage) and how does it work? 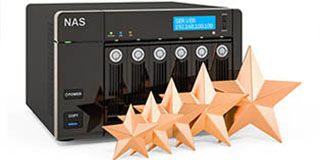 Network-attached storage (NAS) is a category of file-level storage that’s connected to a network and enables data access and file sharing across a heterogeneous client and server environment.

“Ideally, NAS is platform- and OS-independent, appears to any application as another server, can be brought online without shutting down the network and requires no changes to other enterprise servers,” says research firm Gartner in its definition of NAS.

NAS evolved from file servers used in the 1980s to provide access to files for network clients. NAS devices typically consist of bundled hardware and software with a built-in operating system, and they typically use industry-standard network protocols such as SMB and NFS for remote file service and data sharing and TCP/IP for data transfer. In an enterprise setting, NAS can allow IT teams to streamline data storage and retrieval while consolidating their server and storage infrastructure.

“With NAS, you have a file system. When you set up a NAS, it looks like a giant shared drive. And you can set up lots of different shared drives,” says Scott Sinclair, senior analyst with Enterprise Strategy Group. “It can leverage the SMB protocol, which is predominantly for Windows, or the NFS protocol, which is predominately for Linux – those tend to be two big file-based protocols for NAS.”

What NAS form factors are available?

NAS accesses data as files, while a SAN stores data at the block level.

NAS vs. SAN: What's the difference?

NAS is generally associated with unstructured data such as video and medical images, while SAN is associated with structured workloads such as databases. “Most organisations have both NAS and SAN deployed in some capacity, and often the decision is based on the workload or application,” Sinclair says.

What is unified storage?

Unified storage – also known as multiprotocol storage – grew out of the desire to stop procuring SAN and NAS as two separate storage platforms and to combine unified block and file storage in one system. With unified storage, a single system can support file protocols such as NFS and SMB as well as Fibre Channel and iSCSI block storage. NetApp is generally credited with the development of unified storage, though many vendors offer multiprotocol options.

Today, the majority of midrange-enterprise storage arrays tend to be multiprotocol, Sinclair says. “Instead of buying a box for SAN storage and a box for NAS storage, you can buy one box that supports all four protocols – it could be Fibre Channel, iSCSI, SMB, NFS, whatever you want,” he says. “The same physical storage can be allocated to either NAS or SAN.”

One exception to the trend toward multiprotocol storage is in enterprise environments where unstructured data demands dwarf structured data requirements – media and entertainment, healthcare, oil and gas are industries that tend to generate more unstructured data. In those settings, enterprises care about massive scalability, and they tend to rely more on NAS than on SANs.

Sinclair likens the traditional scale-up model to a freight train with a single engine that pulls as many cars as required. “The engine is moving the train, and as you need more storage, you buy more storage cars,” he says. But there’s a fundamental challenge with this approach: It requires a massive upfront purchase to buy the engine, which must be sized – and is priced accordingly – to handle future capacity requirements.

Scale-out NAS, by comparison, allows organisations to increase capacity and performance as needed. “Scale-out NAS is more like buying a fleet of trucks. Each engine is specifically designed to only pull the storage that’s associated with it, and the trucks work together in concert,” Sinclair says. “If I want to add more performance later, I can add in another node and scale both performance and capacity together. In that way I’m not stuck with a huge upfront purchase.”

Another scale-out feature that’s critical for NAS environments is the ability to add new NAS boxes to an infrastructure that contains prior-generation gear. “If an architecture does scale-out well, it allows you to mix multiple generations in the same solution,” Sinclair says.

Conversely, scale-up architecture requires moving data from old gear to new gear. In an environment with multiple petabytes of storage, such data migration would be prohibitively time-consuming and expensive.

“So these larger data environments that tend to have more unstructured data, that tend to be more NAS related, are often based on a scale-out architecture that can survive multiple generations,” Sinclair says.

NAS vendors continue to add features to improve scalability, manageability and efficiency. On the performance front, flash storage is having an impact on enterprise NAS. Vendors offer hybrid NAS arrays that combine spinning disks with flash drives, as well as all-flash NAS hardware.

In the enterprise storage world, flash so far is making greater inroads in SAN environments because the structured data workloads in a SAN tend to be smaller and easier to migrate than massive unstructured NAS deployments. Flash is impacting both SAN and NAS environments, “but it’s predominantly on the SAN side first, and then it's working its way to the NAS side,” Sinclair says. “That being said, with the rise of certain workloads, such as machine learning and AI, where they want access to a lot of data at very high performance, we are seeing interest in massive all-flash file systems."

This market is still in its early stages — IDC’s 2020 IT Infrastructure Survey found that 44% of respondents run less than 40% of their apps and workloads on all-flash arrays — but IDC expects this number to grow.

A perhaps even more important trend is the rise of software-defined NAS systems that store their data in the cloud — either public, private or hybrid, depending on the needs of users.

"Data-intensive organisations such as healthcare and life sciences customers, pharmaceutical and genomics companies, universities, media and entertainment and technology manufacturing are all spearheading the move to cloud NAS," says Krishna Subramanian, President and COO of Komprise. Cloud-based NAS uses file-based storage rather than the object storage cloud data is famous for, which drives costs much higher, though in many scenarios overall costs still beat local NAS deployments.

"If you need the performance of cloud NAS for frequently accessed files, it is important to manage the data lifecycle," Subramanian says. "Cold files should be entirely moved off and transparently tiered at the file level from cloud NAS to less expensive yet resilient cloud object storage such as AWS S3 or Glacier or Azure Blob to maximise savings on storage, data recovery and backups."

What is consumer NAS?

Consumer NAS is aimed at home users who want a centralised storage system that allows multiple users to access files from PCs and mobile devices without having to plug directly into a drive. Consumer NAS can function as a file server, print server, backup system and media server.

This humbler end of the market will see growth in the near future: a recent market study found that the consumer and SMB NAS market will grow 7.6% a year between 2021 and 2027. Example vendors that offer consumer NAS products include Asustor, Buffalo, QNAP, Synology and Western Digital.